— For the past decade, China has launched the China-Europe freight train service in over 60 domestic cities and has connected with major European countries.

— The rumbling trains have acted as a carrier for the Belt and Road Initiative in terms of boosting trade exchanges between inland Chinese regions and Europe.

— Despite gloomy international trade prospects caused by the COVID-19 pandemic, the China-Europe freight train has managed to buck the trend and made more trips thanks to its security and efficiency.

CHONGQING, March 19 (Xinhua) — With a loud train whistle echoing through the air, a freight train bound for Duisburg, Germany, slowly pulled out of the Tuanjie Village Station of southwest China’s Chongqing Municipality on Friday morning.

“Exactly a decade ago, I signaled for China’s first China-Europe freight train, the Yuxin’ou (Chongqing-Xinjiang-Europe), to depart here,” Zhang Xin recalled while seeing the train disappearing in the distance. Zhang has dedicated himself to 12 years as head of the station.

For the past decade, the rumbling trains have not only put the once-obscure and dilapidated station on the map but also acted as a carrier for the Belt and Road Initiative, boosting trade exchanges between inland Chinese regions and Europe.

China has launched the China-Europe freight train service in over 60 domestic cities and has connected with major European countries. 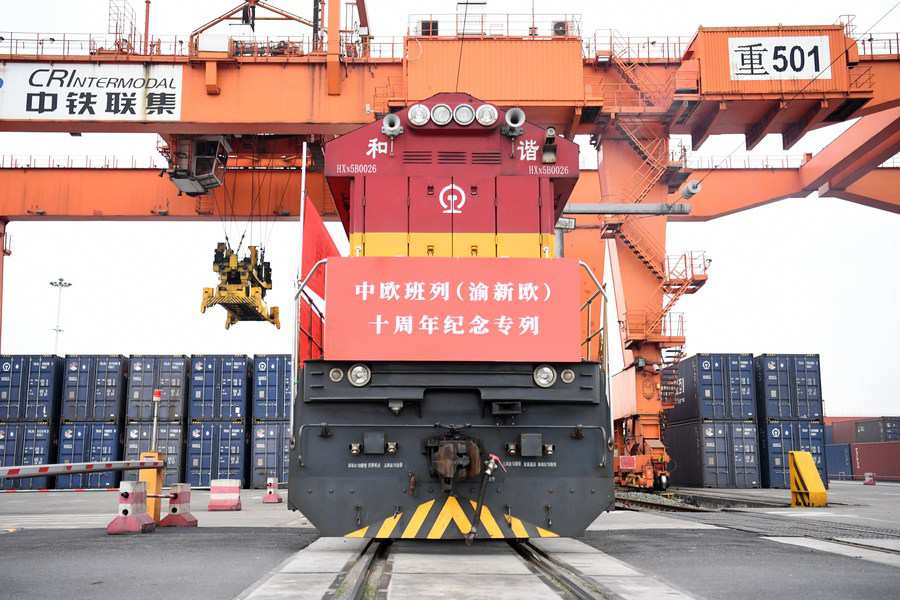 Before the railway launch, Chongqing, a city more than 2,000 kilometers away from the nearest ports, was hindered by its geographical location. Product exports either took the distant and time-consuming east-bound route via coastal areas for transport via sea or took the expensive air route.

The more time-saving and cost-effective Yuxin’ou railway has thus come into being. It forged ties between Chongqing and foreign countries, including Kazakhstan, Russia, Poland, and Germany along the route, with only one-fifth of the cost of air transport and one-third of the sea transport time.

The now bustling station once faced various barriers. Cargos had to go through inspections at every border, and temperature differences may reach as high as 70 degrees centigrade, which posed challenges for electronic products.

With persistent efforts, the railway achieved mutual recognition of customs clearing with countries along the route. It developed a 15-centimeter thick thermal insulation material to tackle significant temperature differences on the way. It also devised a satellite tracking system for containers to ensure safety.

Chongqing has also taken the lead in revamping its former supervision and regulation model based on piles of paper documents and cumbersome procedures into a digital and intelligent one.

In June 2016, all railway routes were merged into the “China-Europe freight train service” brand and put on blue coloring.

Statistics showed that it took three years and three months for the freight trains to make 200 trips, but only two months to grow from 800 to 1,000 trips.

Trade prospects became gloomy, unexpectedly, in 2020 when the COVID-19 pandemic took a toll on the global economy and blocked sea and air transport. In the depth of the pandemic, the backlog of international parcels across China once surpassed 1,500 tonnes.

However, the China-Europe freight train has managed to buck the trend and make more trips thanks to its security and efficiency.

Last year, the freight trains made 12,400 journeys and transported 1.14 million twenty-foot equivalent unit (TEU) of cargo, up by 50 percent and 56 percent year on year, respectively.

During the pandemic, freight trains continued to operate, loaded with not only garments, toys, electronic products, and tens of thousands of cross-border goods but also anti-epidemic supplies that the European countries were in urgent need of.

As a driver for the China-Europe freight train for ten years, Jiang Tong said he is proud of his work to deliver anti-epidemic supplies.

“I played my part in the global fight against COVID-19 by driving those supplies to people in need,” Jiang said.

Also, the freight train service took on the responsibility of securing the stability of the global supply chain when other transport means were hampered.

Prompted by the growing number of people working from home and learning remotely, Taiwan-based ASUSTeK Computer Inc. saw its computer shipments grow exponentially in 2020. Blocked transport, however, exposed the company to default risks.

In 2020, the company sent 1,000 containers via the freight trains in total, an increase of 200 percent compared with the same period of the previous year.

With the world’s largest middle-class consumer group of more than 400 million people, China has become a world market for commodities transported by China-Europe freight trains from other countries.

Jin Haijun, a Chinese businessman in Spain who always wanted to expand his wine businesses in China, was set back by the drawn-out logistics.

On November 18, 2014, the China-Europe freight train connecting Yiwu and Madrid, the largest small-commodity distribution center in Europe, was launched. It shortened the transport time to ten days.

Now, this red wine is sold to China, the United States, and Japan, and its annual sales reached 200 million bottles.

Thousands of Russian goods such as honey, rapeseed oil, and biscuits have also benefited from China-Europe freight trains to meet Chongqing consumers, according to Liu Xiaomin, manager of the Russian hall of the Belt and Road Commodity Exhibition &Trading Center in Chongqing.

Considering the lengthy transport time, some goods with a short shelf life could not be exported to China, Liu said.

In 2020, China overtook the United States as the EU’s biggest trade partner, according to the EU statistics agency, Eurostat.